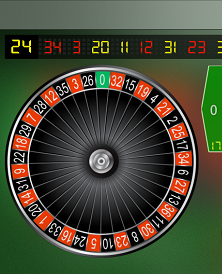 There are two types of roulette wheels – those featuring one zero and those featuring two. Single zero roulette games are available in many parts of the world, and are the standard offering throughout much of Europe. There are two versions of the game that feature a single zero – these being the European and the French versions. A roulette wheel has 37 slots on a single zero wheel. The slots are numbered from 1 to 36 and there is also an additional 0 slot. The 0 slot is coloured green and the other numbers will alternate from red to black in color. It might seem that the numbering on the roulette wheel is somewhat random; however the distribution is arranged so that the sum of a group of numbers on one part of the wheel will be similar to another area of the wheel of the same size.

There are two distinct areas when betting at roulette – inside and outside bets. Inside bets refer to bets a player will place on individual numbers on the wheel. Outside bets refer to the groups of numbers players will bet on. The most popular inside bet is the straight bet where a player´s chips will be placed on one individual number. This has the highest payout in roulette and a player will win thirty five times of his stake. Outside bets cover larger groups of numbers. The most popular outside bet is whether the ball will land in red or black, which pays out at odds of even money. Both European and French roulette have just one zero. European rouletteoffers all of the above bet types, whilst French roulette offers some other options and rule variations alongside the above bet types.

The house edge at these games is 2.70%. However if playing French Roulette and gambling on an even money shot, this house edge is reduced to 1.35%. This reduction in house edge doesn’t apply to any non-even money bets. Double zero roulette offers a house edge of 5.26%.

La partage and en prison only applies to even money bets such as red/black or odd/even and when the ball lands in the zero slot. Only one of these two rules will apply at any particular table. Under the La Partage rule, the player will have half their bet refunded. Under the En Prison rule, the bet will remain on the table, and will await the outcome of the next spin. If the spin is successful, the bet will be returned to the player, otherwise the house will retain the bet.