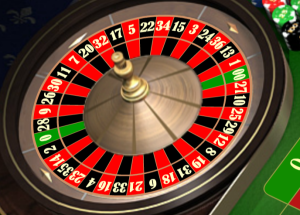 The double zero roulette wheel has 38 slots, with two zeros alongside every number from 1 to 36. The zeros are numbered 0 and 00 so players will be able to differentiate between the two. Both zeros are coloured green, and the other numbers will alternate between being black and red. Customers can find a great number of land based casinos featuring double zero wheels, especially in the US. The greater house edge on these games make these wheels very popular with casino owners and in many cases lower stakes games will be offered on double zero wheels only. While playing online, people will find a large number of casinos that feature both American and European wheels.
People will find a big choice of betting options when playing double zero roulette. While a player is playing roulette, he might notices that the betting area is divided into two sections, with the individual numbers on the ‘inside’ and the group of numbers on the ‘outside’.

The double zero roulette game has multiple ways of betting. At first, these are some inside bets a player could play.

There also are some outside Bets a player can play.
• Red or Black – A player has to place chips on whether the ball will land in either red or black. This is the most popular bet in all of roulette and a player will double his or hers money if he or she wins.
• Odd or Even – Another even money bet – if the ball lands in either zero, the player will lose his or her bet.
• 1/18 or 19/36 – Here players will be betting on the lower or the higher group of numbers, once again paid out at even money.
• Dozen Bets – Here players are betting on whether the ball lands between 1 and 12, 13 and 24 or 25 and 36. If successful players will win 2x their bet.
• Column Bets – Much like the dozens bet, players are betting on a group of twelve numbers and win 2x their stake. The difference is that players are betting on the group of numbers in a column on the betting area.

The casino has a 5.26% edge when playing this variation of the game. In some circumstances players will find a variation of the ‘La Partage’ rule available when playing double zero roulette. This is particularly the case when playing in Atlantic City and on select tables in Las Vegas. This rule comes into effect when the ball lands in either of the zero slots and leads to players receiving half of their stake back. This changes the house edge from 5.26% down to 2.63% which actually gives the house a lower edge than the European game.