A lot of the roulette playing systems that are operative will advise the player to make use of betting on numbers which have appeared in the last few spins and the reason for this is to ensure that the player is able to take full advantage of the winning streak. But what is the best roulette strategy for hot and cold numbers? The reality is however that the numbers will not appear and so the player will very quickly find their bankroll diminished very quickly. The reason for this is that the numbers will appear twice and then never appear again. If the player is interested in making a profit then they will need to make a distinction between the numbers that will appear again, and those which have simply stopped appearing all in. Sadly, the truth of the matter is that it is simply not possible to do so and therefore in order to progress, the player should pay especial attention to numbers which have NOT appeared during the initial 20 spins of the wheel. 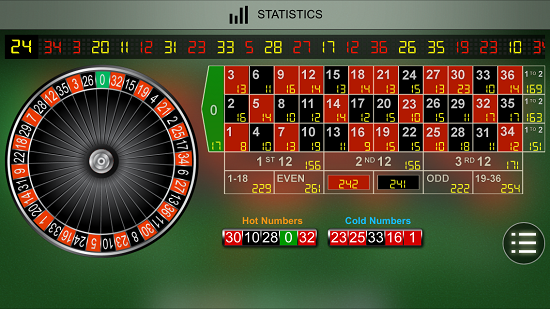 What are hot & cold numbers?

The concept of the Hot and Cold numbers is really simple, if a specific number result comes up frequently in recent draws, this number is named as a ‘hot number’ but if the opposite happens the number is called a ‘cold number’. However, many online roulette players seem to value these numbers more than they perhaps should. For example, thinking that a hot number is more likely to appear again consequently placing a straight bet on it.

it’s important to understand that roulette is a game of chance, each number on the wheel has the same chance of appearing with the next spin and each roulette spin is independent from the last.

Most of the times, roulette tables will follow the same basic pattern and that is that the players will wager their money on the numbers that have already appeared. The sad truth is that the chance of getting these numbers are very remote indeed so the player need to wager on different numbers. What the player should do then is to make sure that they place their wagers on those numbers which have not appeared within the first 30 rounds. In addition, the player must make there that there is at least a half a dozen numbers that have not actually been hit during the course of the initial 30 spins.

As with any other new roulette system, it is strongly recommended that the player actually gets to know the betting system before he or she begins wagering in earnest with real money. Therefore, the player should hone their skills by making use of any free roulette games.

For showing how statistical independence works, here is an example; Ten black results appear in a row, surely the next result has to be red? This is a common misconception among online roulette players. Just because the same result has appeared multiple times, this doesn’t indicate anything about the next result as each spin is independent from the last.

An individual number hasn’t appeared in over 100 spins (it’s now considered a cold number). This would indicate the wheel somehow stops the result from appearing and favors other numbers.
If playing online roulette on a credible casino site, then each spin is fair and thus the chance of any one individual number appearing is identical regardless of which number is selected or whether it has appeared a lot in recent draws or never in hundreds of spins.

If a player doesn’t have a favorite number or a specific bet in mind for the next spin, they could use a hot or cold number. It has exactly the same chance of winning as any other number. Online Roulette Systems & Strategies are much more useful than concept such as Hot and Cold numbers.